Geologic maps show where various rock units and structures lie at the earth's surface. Because many of these structures are planar, or approximately planar features, they interact with topography in predictable ways.

Flat-lying Beds.
Where beds are horizontal, or nearly horizontal, their contacts must also be horizontal--so, on maps, contacts run about parallel to contour lines. Geologic maps which portray flat-lying rocks are very distinctive: the various colors used to distinguish rock units are confined by contour lines and so accentuate the topography.

Look below. The photograph on the left shows a bird's eye view of some sub-horizontal rocks near the Grand Canyon. The map on the right shows part of the Grand Canyon itself. Even though they are of different places, you should be able to see that in both, the relationship of bedding to topography is the same.

The Inner Gorge. The map above shows a part of the western Grand Canyon where the Colorado River has cut only as far ast the Cambrian Muav Limestone (shown in light green--near the river). Farther upstream, the river has cut below the Great Unconformity into the underlying Precambrian rocks. This area is called the "Inner Gorge". Click here to see a more detailed map of the geology of part of the Inner Gorge. From a geometrical standpoint, this map is instructive because it shows steeply dipping contacts beneath sub-horizontal ones.

The Rule of Vs.
One of the most important generalities is the "Rule of Vs", which states that where dipping surfaces are incised by stream valleys or canyons, their map view will make a "V" in the direction of dip. If the surfaces dip vertically, then they do not make a "V"; if they are horizontal, then they will follow the contours: the "V" will point uphill. The only exception to this rule comes when the dip of the surface is less than the gradient of the valley. Then, similar to horizontal surfaces, the surface will make a "V" that points upstream.

Take a look at the photo below. Note that the beds dip to the left and towards the viewer. Wherever they are cut by gullies, the outcrop pattern is such that the beds "V" in the direction they dip. 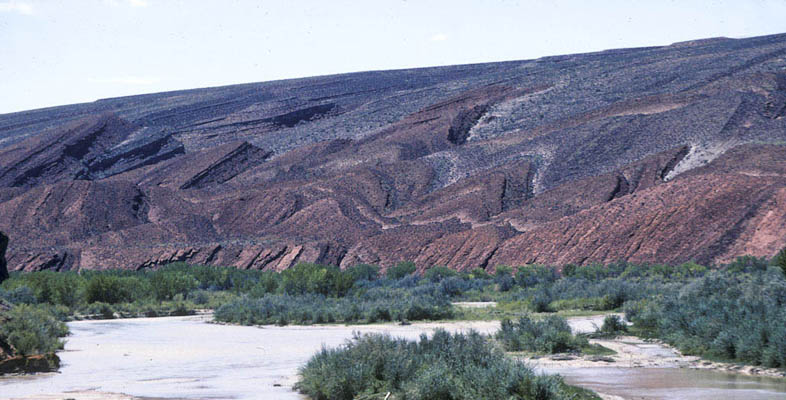 Click here to see block models of the rule of Vs. 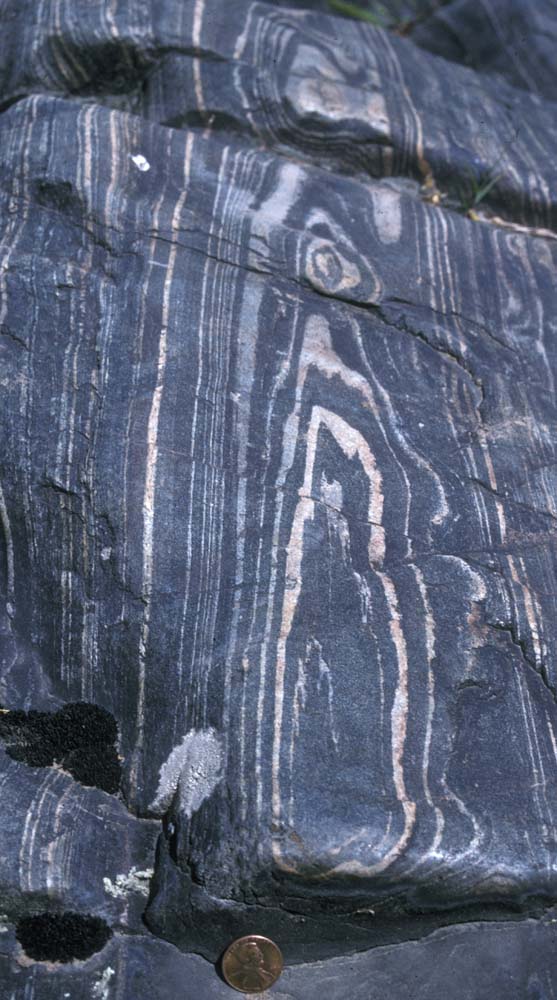 a gneiss that is folded into a synformal shape, plunging in the direction of the penny... note how the "nose" of the fold is opposite that of the plunge direction.

Click here to see the nose of a plunging syncline in limestone as viewed from the ground.

Click here to see a map of plunging folds in the Valley and Ridge Province of Pennsylvania.

The area over which a particular unit crops out is only partly related to its thickness. What's more important, is its dip and the topography it underlies.

click here for a diagram and more description of the relation of outcrop width to bedding attitude and topography.

Back to Structural Geology Images

Back to Geological Photos